A Look Back: The CUNY Contingent Struggle Against the New Caucus, 2006-2008

When the Adjunct Project joined with CUNY Contingents Unite and other groups and individuals in May to initiate the $5k petition, we were reminded of the “Adjunct Rebellion at CUNY” vis-a-vis contract negotiations between the New Caucus-led Professional Staff Congress and the CUNY administration from 2006 to 2008. The following piece from the CUNY Internationalist Clubs’ paper Revolution (which doesn’t post every article online, hence the below scan) details this rebellion and shows, once again, that the PSC leadership—the same leadership as today—hasn’t ever represented contingent academic workers properly. To wit:

“The contract the PSC settled with CUNY in June 2006 left the abysmal conditions of contingent faculty in place. An adjunct activist who is a CUNY Internationalist Clubs member spoke at the union’s Delegate Assembly calling for a ‘no’ vote on the contract. However, while many ‘part-timers’ were deeply dissatisfied, by and large they tended to buy the promises of the union leadership (organized in the social-democratic ‘New Caucus’ of union president Barbara Bowen) that ‘adjunct issues’ would be a priority in future rounds. Some also wanted to avoid criticizing the union officers at a time when the New Caucus was running for reelection, facing a right-wing opposition called CUNY Alliance.

“That contract expired in September 2007. The next month, the union launched its new contract campaign at a mass meeting in Cooper Union, where hundreds chanted ‘Fight, fight, fight!’ and cheered adjunct activists’ calls for a militant mobilization. At the rally, Bowen put forward key priorities for this ‘phase’ of the union’s ‘multi-contract strategy.’ […] When adjunct activists asked the union’s negotiating committee to make a commitment to not sign a contract that would increase the gap between full- and part-time faculty, they were told that ‘the strategy’ had already been decided…by the negotiating committee and Executive Council. In other words, forget it. […]

“On June 20, the PSC leaders and CUNY management reached a ‘settlement’ that did nothing to move towards job security for adjuncts and other contingent faculty, left their wages at poverty levels (providing below-inflation raises for full-time faculty, while widening the gap with part-timers’ pay), and left the issue of health insurance for grad students to future negotiations with the city and state.

“CUNY contingent activists reacted with outrage. Adjuncts long active in the union joined with grad students from the Adjunct Project to launch an unprecedented campaign for a ‘no’ vote. […]”

Click the images below to read the whole article from the September 2008 issue of Revolution. 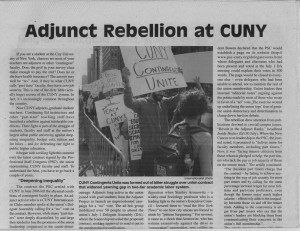 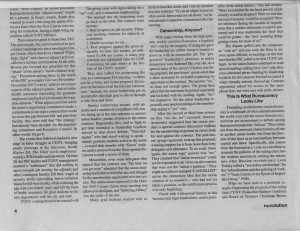 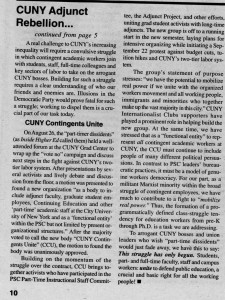 Need help with the Commons? Visit our
help page Send us a message
Skip to toolbar

Built with WordPress Protected by Akismet Powered by CUNY