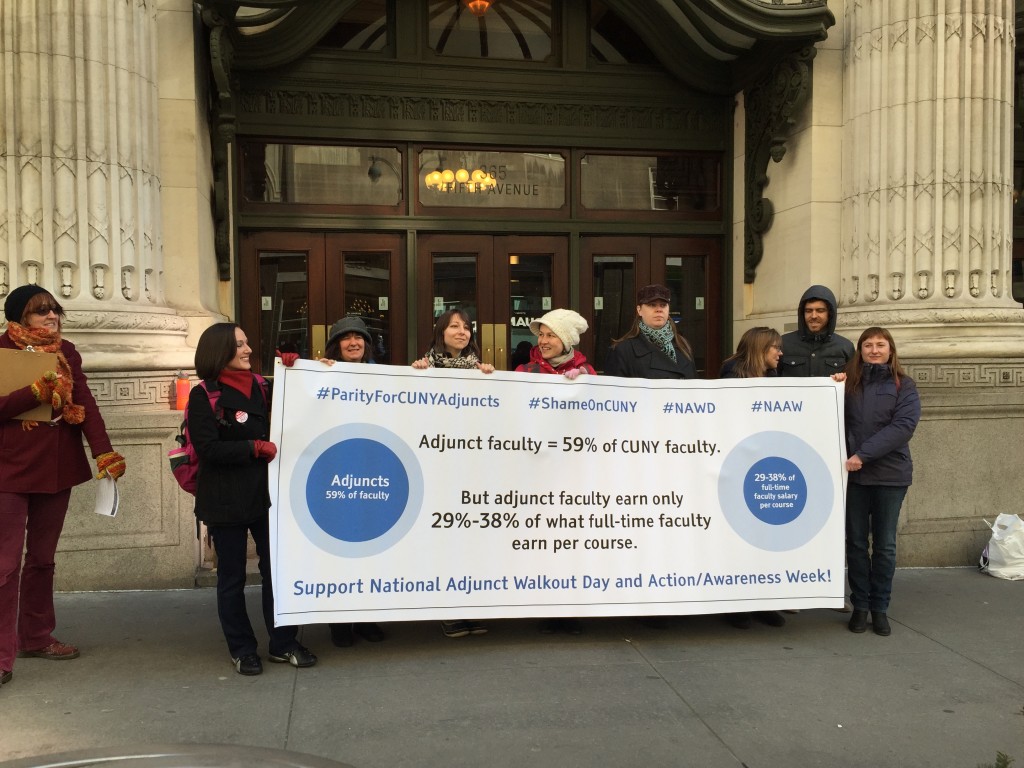 Today was National Adjunct Walkout Day (NAWD), a first-of-its-kind grassroots action in which some adjuncts at colleges and universities across the country walked out of their classroom in protest of their—our—unfair pay and working conditions as second-tier faculty.

At CUNY, no adjuncts walked out due to New York State’s 1967 Taylor Law, which prohibits public employees from striking (though at a Professional Staff Congress Graduate Center chapter meeting over lunch today, Stanley Aronowitz made an impassioned plea to break the Taylor Law in order to break the our contract-bargaining impasse with the state, which hasn’t okayed an economic offer yet).

Instead, adjuncts, graduate employees, and other faculty taught about academic labor and adjunctification in their classes (resources to do so, anytime, via the CUNY Adjunct Project), tabled in common spaces on their campuses, and held meetings, departmental and otherwise, to discuss the significance of NAWD and the adjunct struggle broadly.

At the Graduate Center, the CUNY Adjunct Project collaborated with GC students to make and hold a banner in front of the GC’s entrance pointing out that, while adjuncts make up 59% of CUNY’s total faculty, they’re only paid 29%-38% of what full-time faculty are paid. In addition to the banner, we created a flyer (see it below) that provided more data and analysis, and which explained the Taylor Law and its effects, to hand out to both GC students, faculty, and visitors as well as passersby on the busy block on which the GC is located, just north of the Empire State Building. A few PSC organizers also joined us and handed out an additional flyer that amplified the message of the day.

We held the banner and flyered from 11:30 a.m. to 12:30 p.m., at which point we went upstairs to the aforementioned chapter lunch meeting (an important opportunity to share news and discuss various labor matters). No doubt we would’ve reached more people if we’d stayed longer, especially given the uptick in people traffic as the lunch rush continued, but we gave out 400+ flyers in the hour we were there, a decent result. And the banner’s being used again for an action at CUNY’s Hostos Community College on Friday, as part of National Adjunct Action/Awareness Week, the longer-duration event NAWD gave rise to.

People already have been asking us what’s next. Let us know what you’d like to see happen, and if you’d like to be involved in making it happen, in the comments to this post.

Below is the flyer we handed out, as well as a short video of the action and additional photos. If you’d like to amplify the action, use the hashtags listed in the flyer and post to Facebook, Twitter, or other social media. 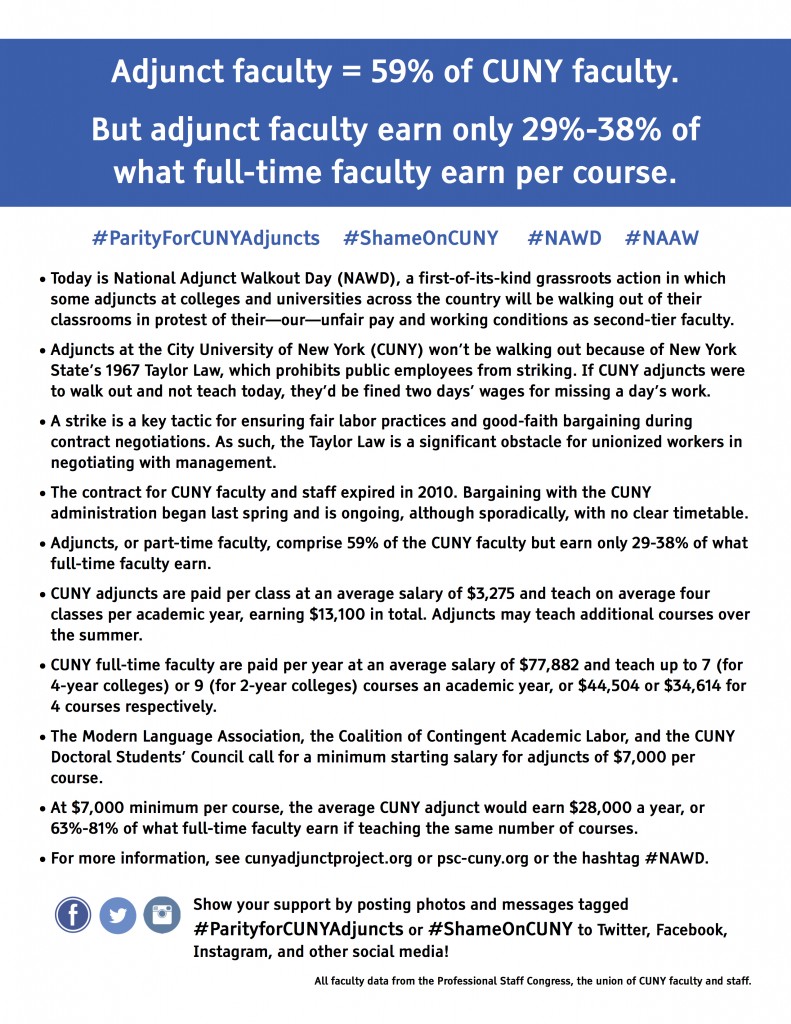 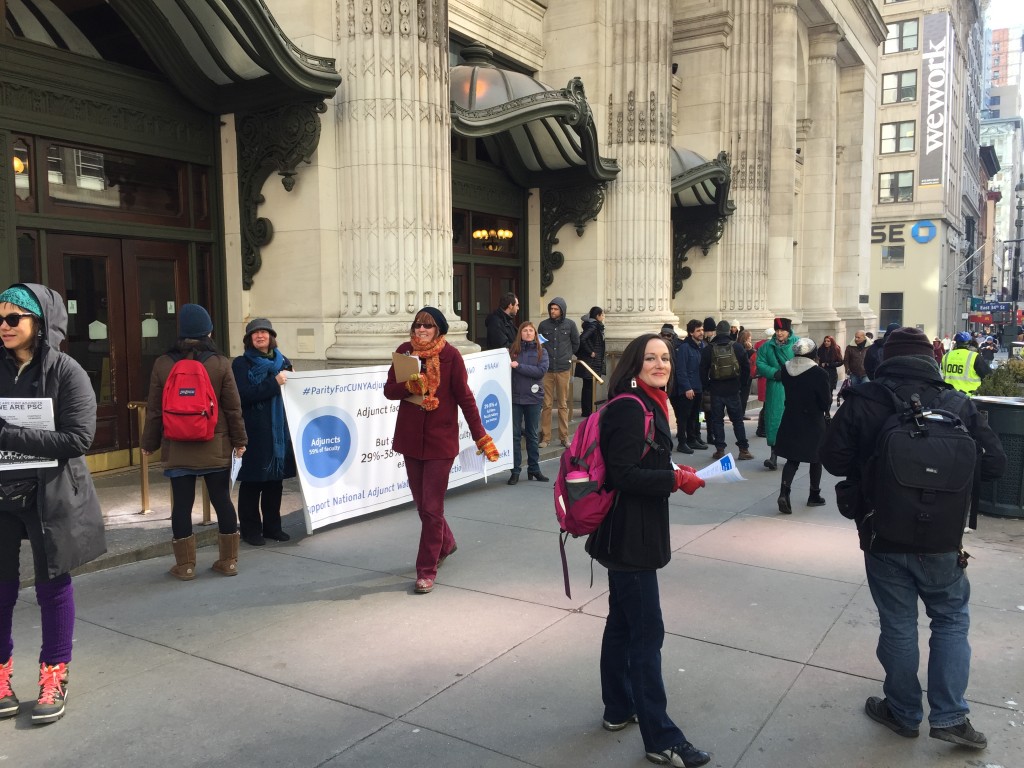 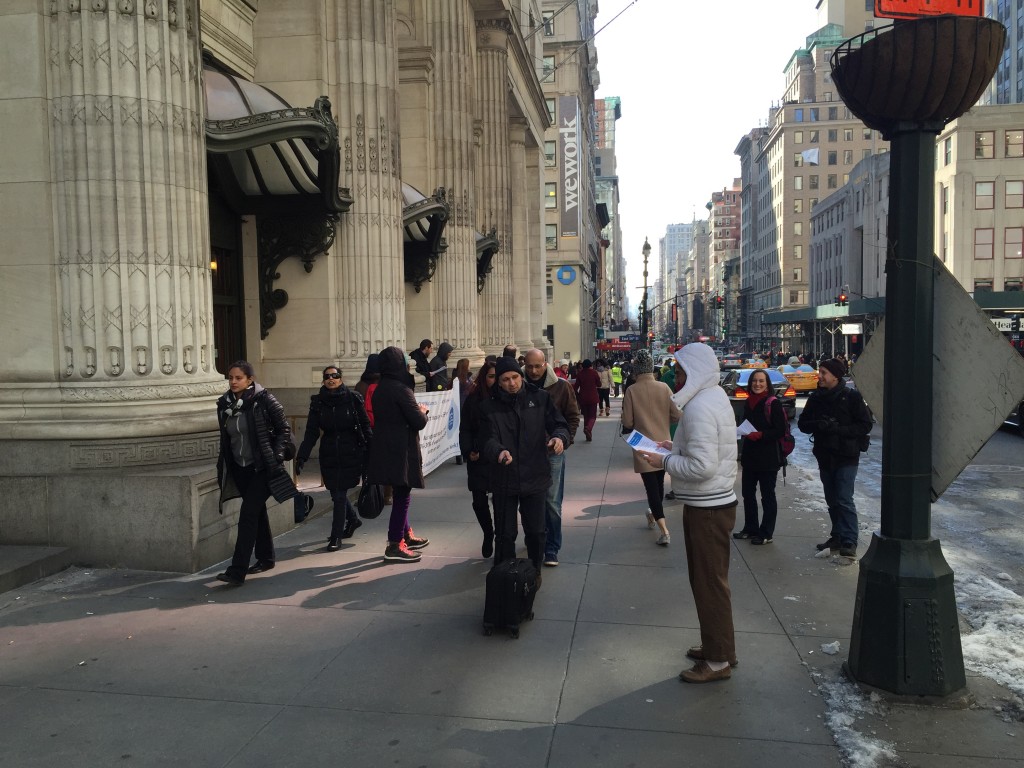 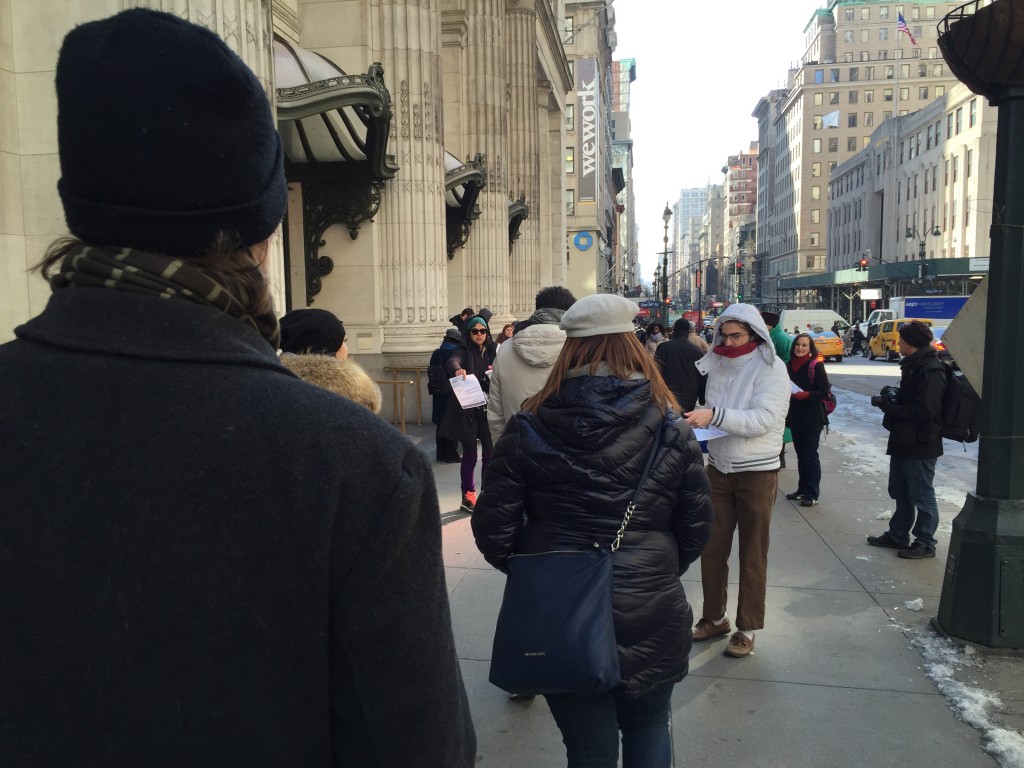 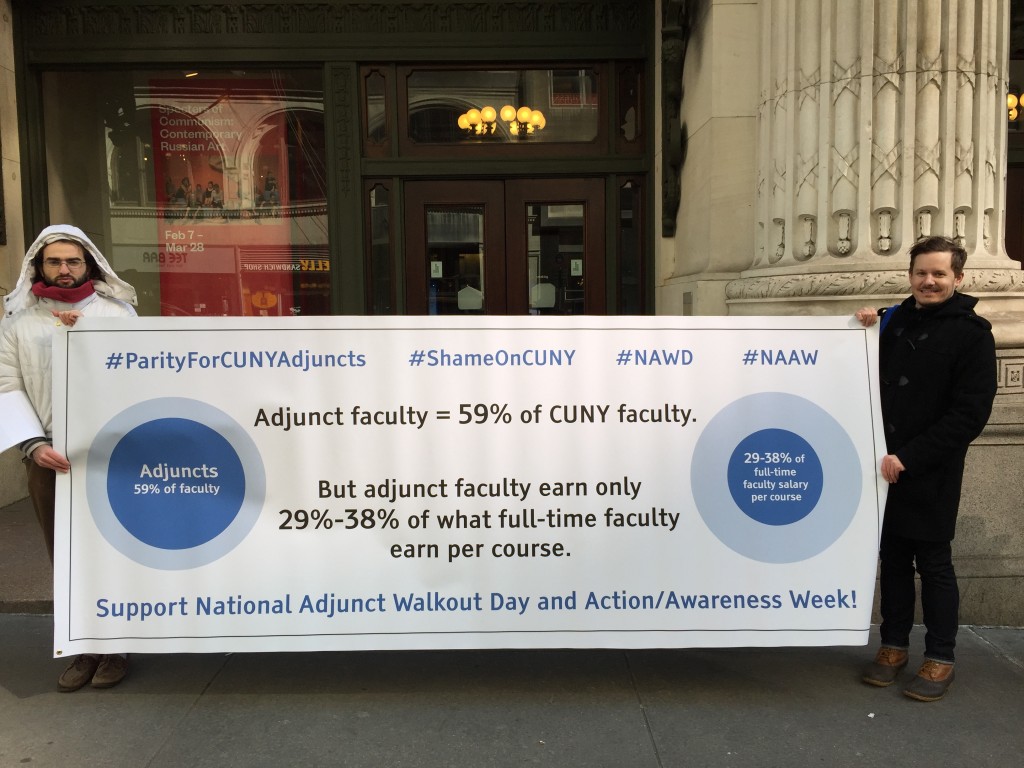 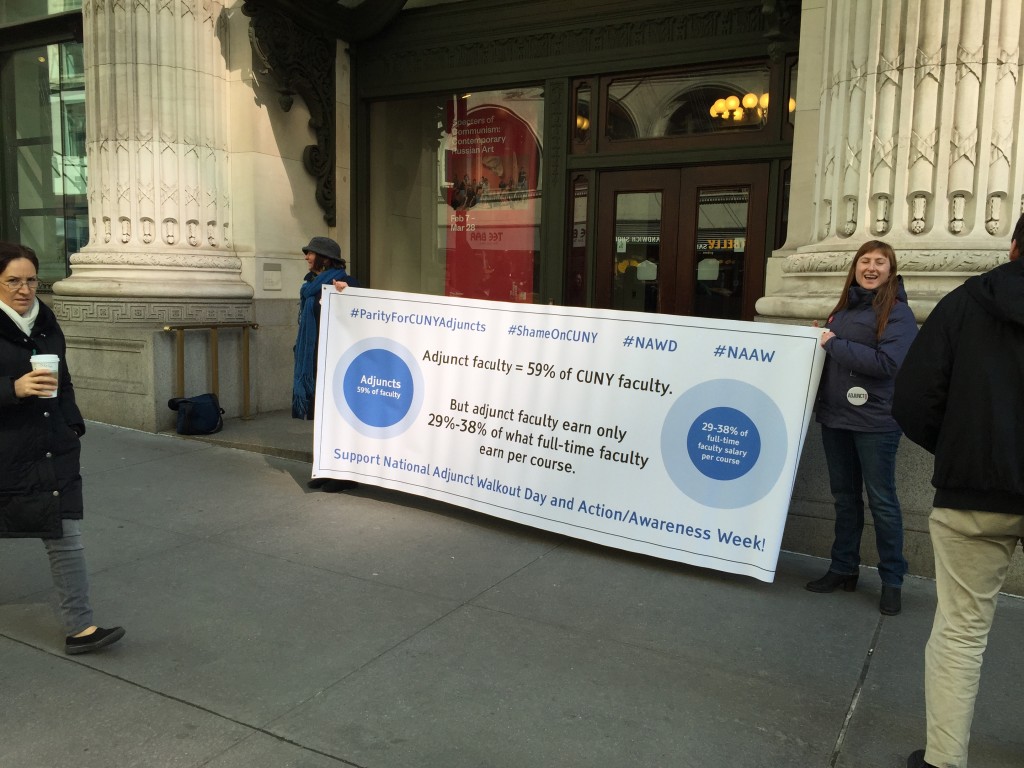 2 thoughts on “National Adjunct Walkout Day at the Grad Center”

Need help with the Commons? Visit our
help page Send us a message
Skip to toolbar

Built with WordPress Protected by Akismet Powered by CUNY